Honda BR-V Modified - How About Some Upgrades?

It has been some time since the day the Honda BR-V was introduced to the markets around the world. Instead of focusing completely on the vanilla option, we suggest you get your Honda BR-V Modified. It will be so much fun and high performance.

People with less experience struggle a lot to determine the changes. That is why we prepared this article to make it easier for you.

As its name suggests, this model received some modifications. That is why you will notice that it looks the best when observed from the three quarters in front. The new, humongous chrome grille works nicely with the chunky bumper and the huge headlamps.

However, you will feel disappointed looking at it from the rear. We want to note that using some large tail lamp wraps to lessen the emptiness is a smart move. It could look even better if it was able to hide the Mobilio roots.

The wheels go as high as 16 inches, providing a 210 mm clearance from the ground. This makes the Honda BR-V Modified model have a 30 mm higher ground clearance. You will be able to be less worried about bumps while driving in this car.

Despite originating from the Mobilio line, there are many improvements in the Honda BR-V Modified. The whole design features lots of surface changes, cuts, lines, and finishes. While some may say that this style lacks harmony, no one can deny that it commands attention.

The placement is sound in the ergonomic sense, though. The driving section’s position seems to follow the car style more than the SUV style. As a result, it feels much more comfortable and natural. All the gears are specifically placed, from the gear shifter to the pedal position.

The control scheme’s layout also doesn’t ask much. Most of us won’t need to spend any more than some hours to completely familiarize ourselves with them.

The biggest plus comes from the spacious interior. While its shoulder room cannot impress due to the width limit, it more than makes up with the headroom. This effect results in the passengers believing that the space is more spacious than it really is.

There is also the help of the second row’s sliding capability. This feature increases the legroom for all occupants throughout the three rows.

All the seats featured in this car fall on the comfortable side, and they can all recline. A long ride in this car will be significantly more manageable, as you won’t feel as fatigued.

The second-row seats have a full tumble feature, allowing easy access to the last row seats. This process can be a nightmare in other cars that don’t have anything in the same vein.

There are some interesting additional features allowed to the Honda BR-V Modified. It has keyless entry as well as single-zone climate control. Both features make long trips a lot less taxing. The car follows the same airbag standard of two units in the front. There is no reversing camera, though.

The base engine attached to the Honda BR-V is a 4-cylinder, 1.5-liter unit. In other words, this car uses the same engine as Honda City. That is why it can go as high as 118 horsepower or 145 Nm in torque.

Despite this respectable strength, the engine doesn’t sound weird or unpleasant. It does have a downside lying in its shift quality, though. The 6-speed manual, as a result, also gets a touch too notchy. If you are not a fan of strenuous drives, you can opt for a CVT choice.

This beast excels the most at handling and ride stability for performance, much like the Mobilio. Nevertheless, there are some improvements, such as some stiffening in the suspension system. This choice allows the car to make up for the increase in weight without changing the travel speed.

You will see the effect clearly while driving alone by checking the ride’s firmness. There is practically no side movement, and the suspension system provides lots of suppleness to absorb bumps. This stability is a godsend if your family packs lots of stuff for outdoor grilling parties.

Its steering performance is also stellar, with predictable and quick responses to the wheel’s inputs. For this reason, the car feels firmly planted, riding flat through any and all undulations at every speed option.

After reading through this Honda BR-V Modified, have you considered about upgrading your BR-V? We believe that it can serve as a good investment since it's customized according to your hobby. Hope that out car tips and advices can help you make the right decision.

Thank you for reading on Philcarprice Philippines! 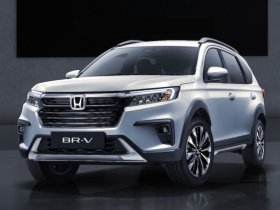