It's been six years since Honda introduced the fifth generation of Civic Type-R. Therefore, Civic fans are longing to see the latest Civic Type-R. And they pose a common question when referring to a sports car: “What’s Honda Civic Type-R top speed?” Here the answer is.

Before going into any further detail, we would like you to have a quick glance at the Honda Civic Type R specs:

When buying any car, especially the sports type, the engine will be the foremost factor you care about. The latest Civic Type R model features a more superior 2.0-liter turbocharged inline-four to the Honda Civic Type R 2022 version. For this reason, the Type R 2022’s output will increase to 340 horsepower instead of the previous 306 horsepower.

By that, we mean generating one horsepower for every cubic inch is a piece of cake to the Civic Type R’s 4-cylinder engine. You can operate the vehicle via a six-speed manual gearbox. The manual system will maintain the sport-car-vibe for drivers rather than the automatic transmission.

2022 Honda Civic Type R’s torque is relatively 295 ft-lbs at 3250 RPMs. This torque is excellent compared to other models in its price range. With such a powerful engine, the Civic Type R can reach 100km/h from the start in about 7 seconds.

According to the judgment from professionals, Honda may apply a hybrid system to the 2023 Civic Type R to follow the increasing hybrid-car trend. Hence, the price will be higher than the previous version. You have to pay about 3,180,000 Peso Philipin to have this Honda sports car in your garage.

What’s more, there hasn’t been any official reports about the Honda Civic Type R fuel consumption. However, you can save a lot of money spent on fuel thanks to the hybrid system on the latest Type R model.

This hatchback’s price is not suitable for any budget, but you will get what you pay for.

Honda hasn’t published the 2022 Civic Type R’s top speed. Since the newly updated version must be at least as powerful as the former one, we can get the approximate figure from the previous Type R model.

Several records from actual and experimental drives have shown that the Civic Type R can reach 270km/h. Particularly, the Type R Limited Edition can surpass this top speed and conquer 280km/h.

From all of these statistics, we can assure that the Civic Type R’s top speed will be at least 270km/h.

Subaru WRX STI is a noteworthy rival of Civic Type-R. The Subaru sports car features a 2.5-liter flat-four engine with 310 horsepower and 290ft-lbs torque. So, the WRX STI can reach 100km/h in around 5 seconds. This acceleration is more impressive than the 2022 Civic Type-R.

However, the Subaru WRX STI’s top speed is 250km/h. In the top speed race, Honda Civic Type-R is the winner.

The sports car from the famous Japanese car company is powered by a 1.6-liter 3-cylinder turbocharged engine. Plus, the GR Corolla’s horsepower and torque are 300HP and 273ft-lbs, respectively. This car can accelerate from 0km/h to 100km/h in around 5.5 seconds. As you can see, the Toyota GR Corolla reaches 100m/h from the start faster than the Civic Type-R.

But, in terms of top speed, Civic Type-R once again defeats the rival from the same country. Toyota GR Corolla’s top speed is approximately 233km/h.

A sports car’s top speed is always the remarkable figure that customers look for when making a buying decision. We hope that by telling you the Honda Civic Type-R top speed, we can help you to decide whether to buy the car or not.

Thanks for reading on Philcarprice.com! Honda Civic Type R Review - Is It Suitable For You? 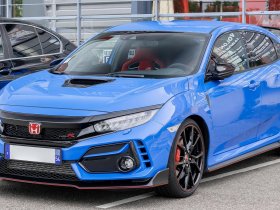